For World AIDS Day 2015, we at VIDC quietly remembered our friends who have lost their lives to AIDS and those who are winning their battle with HIV.  The whole day was quiet, a little solemn, but also mostly hopeful — our battle with HIV has come a long way in the past couple of decades.

We also joined our friend, Bradford McIntyre in reliving his interview at The Dini Petty Show. Bradford sent us a link to his blog where he featured the footage of his interview and reflected on the experience and how far he’s come since the interview for World AIDS Day 1994.

We also took to Snapchat and joined their World AIDS Day Campaign in cooperation with (RED).  For every photo snapped with the (RED) filter, The Bill and Melinda Gates Foundation will donate $3 to (RED), up to $3 MILLION.

The (RED) Revolution is one of the many ways YOU can help. Read more about (RED) by going to red.org and find out how you can help!

Once a year we commemorate World AIDS Day, as the fight against HIV continues. Let’s keep doing what we can to help!

This month’s Community Spotlight is again on Bradford McIntyre.

We want to join him in celebrating the life he was told should have ended within 6 months from November 28 — THIRTY YEARS AGO!

Brad, as you might remember from our September Community Spotlight, is a dear friend of VIDC. A number of our photos (for example, the ones from STRUT 2015 and RR4L 8, to name a few) were taken by him — if there is anything significant happening in the HIV community that we are a part of, we can bet that Brad is already there! Brad’s commitment to the work that he does for the HIV Positive community rivals even our own, and this post sheds some light on what motivates this passion.

This month’s spotlight is a bit different. Not only is it shone on someone we’ve already featured before, but it is also one where we will let the the person speak for himself.

There is no way anything written on VIDC Connect could be as impactful as reading his words for yourself.

As such, follow this link to Brad’s blog to read his reflections on the anniversary of being told he had six months to live (Nov 28, 1985).

Brad, thank you for being such an inspiration to us!

His story was also featured in Vacouverites — follow this link to read about it. And again on the livingapozlife blog — click here to read it.

This month’s community spotlight sheds light on an issue that’s worth celebrating yet heartbreaking. Bradford McIntyre — more commonly known as Brad to us at VIDC — is a friend of VIDC who has successfully outlived the 6-months-to-live diagnosis he was given in 1984.

Brad was recently featured in an article by the Vancouver Courier entitled “Living longer with HIV.” He was the prime example of how the field of HIV is rapidly changing. Not too long ago, being diagnosed with HIV was considered a death sentence; now, because of the new treatments available, people like Brad are living well into their sixties.

This is great news! This means we are slowly but surely making great progress in our fight against HIV. However, this also spotlights a new issue: an aging HIV-positive population.

“McIntyre has been a longtime advocate for HIV/AIDS awareness and started his website positivelypositive.ca in 2003 to share his story and the latest research. He has a good life and enjoys cooking, gardening and spending time at the beach. But he says aging with the virus comes with its own unique set of challenges. These include health, emotional, financial and social effects. ” Vancouver Courier

Because of the advancements in the field of HIV research, people who were expecting to die at a young age, are now given a new hope — a new hope with a new challenge. That means there is a growing population of more senior individuals living with HIV.

The challenge, however, is not just on the individuals who are now given a shot at a longer (and ideally, a more fruitful) life. Society, at large, is also faced with a new challenge. Because an aging HIV population is a fairly recent phenomenon, our society has yet to catch up with services and infrastructures — and especially  the knowledge — to care for and support this growing population.  Most importantly, the stigma and discrimination that comes with the virus, is ever so present.

This is the new reality that Brad — along with the rest of society — has to face.  All the more reason for Brad to keep doing what he does!

As mentioned earlier, Brad has a blog called positivelypositive.ca where his primarily goal is to promote HIV/AIDS awareness and education.

“I receive thousands of emails from around the world,” says McIntyre. “Oftentimes there’s an individual that has just found out they’re positive and is thinking the worst. Then they find my website and see that I’ve lived all these years and I’m married and it gives them hope.” – -Vancouver Courier

Brad turned a death-sentence into a mission. His website provides information, resources, and — most importantly — hope. Resources like positivelypositive.ca are constant reminders that although stigma and discrimination that come with HIV is very real, there is hope of dispelling them through education and awareness.

To find out more about the work that Brad is involved with — did you know that he is a recipient of the Queen Elizabeth II Diamond Jubilee Medal for excellence in the field of HIV/AIDS in Canada? — visit his blog: positivelypositive.ca!

It is because of amazing individuals like Brad that we are encouraged to keep doing what we’re doing. People like him remind us that there is hope, and that there are more and more people getting involved with promoting HIV/AIDS awareness, research, education, prevention, etc!

As promised, here are the photos and updates from when VIDC went out to STRUT our stuff down Sunset Beach last June 6 in support of Foundation of Hope’s (FOH) fundraising efforts for LGBTQ+ Refugees. It was a surreal experience to be part of this momentous event! The energy and the support from everyone who came out was simply overwhelming; although we don’t all fully understand the struggles of being an LGBTQ+ refugee, we all understood the importance of STRUT for them.

We got a good taste of the pain and the struggle of walking (even standing!) in heels! We got a full dose of what STRUT was all about — enduring a bit of pain to get an extremely minuscule glimpse of what LGBTQ+ refugees have to suffer.

That mile was the

our team has ever walked, especially since it was a first (walking in heels for THAT long) for a lot of us.  The blisters and muscle pain we’re still feeling is a constant reminder of the privilege we have in a world that’s just all kinds of unfair.

VIDC is no stranger to working with marginalized, oppressed, and at-risk individuals, and still STRUT was quite surreal for us. It’s one thing to work closely with someone, it’s another to physically get a (very very small) taste of what they’re going through. 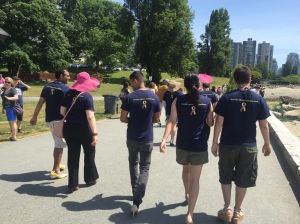 VIDC would very much like to thank Foundation of Hope for organizing this event and for giving us the privilege to be a part of it. We partnered with FOH and attended the event to engage the community and provide financial support to the cause; and yet it seems as though we got so much more than what we gave.

Don’t get the wrong idea though! It was a very meaningful event, but it was also FUN!

Check these photos out for proof!

We definitely got more than what we gave, thank you to everyone that came out and supported STRUT!

Click here for more photos — including a video of our HCV Nurse, Shawn, taking his first steps in heels!

You can also read more about STRUT here from The Georgia Straight.